Most overnighters will require some kind of boat adaptation, either temporary or permanent, to accommodate necessary and required gear. Here are a few refinements to stock that may be worth considering.

Though I am not aware of any boat designs without rear pillars in recent years available within the U.S. market, back in the day there were some stiff plastic European boats without them. Some “pillow” style stow floats, singly or doubly, were made to place behind the seat, filling the entire stern. Not only were they easier to load with no pillar to impede entry, but they held a sumptuously larger amount of gear. One could easily extend week long trips to 10 days or longer. This should give expedition boaters wishing to extend their trips pause about the value and necessity of retaining the rear pillar in their boats. There would seem to be a logical, if not engineering tested, argument to be made about the replacement of a foam pillar by stow floats full of even less compressible gear. Consider the fact that crossover/hybrid river runners have a bulkhead behind the seat instead of a pillar, resulting in a cavernous rear storage compartment. Well, for that matter, perhaps a long overdue engineered I-beam would serve better to bring boat safety and increased storage capabilities further into the twenty-first century than the venerably fat foam pillars of the last.

The rear pillars on some kayaks extend beyond the rear deck into the cockpit, either to provide back support or as part of the seat attachment. On some boats, this extra bit of pillar may be safely whittled back to the rear cockpit combing. The extra space may then be used to accommodate additional waterproof storage. 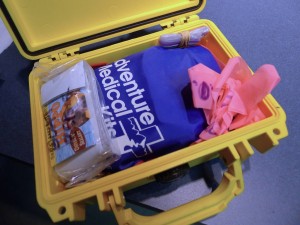 In the days before manufacturer supplied outfitting, kayaks were “foamed out” to provide secure, glove like fits. Among the outfitting rarely seen these days was the the attachment of a cleated tow rope and the addition of an on-board emergency kit. I have continued to add the emergency kit to every subsequent kayak I have owned, because of its additional value in self supporting. I use a small watertight Pelican (‘Peli’) Box to hold emergency repair and first aid gear. 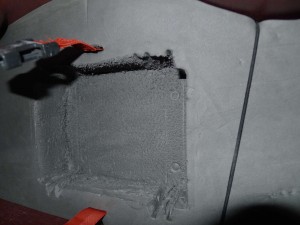 The box travels with the kayak at all times, day or week trip, strapped into a hollowed out section of the rear pillar behind the seat. It is entirely unobtrusive and never forgotten in that location. What changes from day trip to expedition is its contents. Emergency gear is swapped out for items not easily packed into stow floats for overnights. 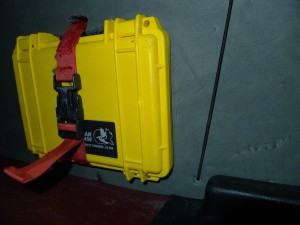 Normally, this includes “cook kit” items including stove and gas canister. I have also used it as the container for a “potty kit”. Its uses are many, adding a bit of extra space not normally available in pillared boats. Any degree of compromised pillar strength due to the hollowed out cavity within the pillar is likely made up in spades by the additional rigidity provided by the Peli box itself.

Modern river runners normally have a combination of a fore bulkhead and an abbreviated front pillar. Although I am personally loathe to make any modifications to front pillars, it’s worth a look to see what one might take advantage of. I was able to strap a bicycle water bottle cage with bottle into the engineered cavity without further modification of the front pillar of one of my boats, allowing ease of access while on river. Large diameter, pipe style, personal waste systems are carried prominently in the front pillar of a least one manufacturer’s version of crossover/hybrid whitewater kayak design.

A regrettable trend on normal river runners is the loss of attachment points about the seat and cockpit. Sometimes, existing “lightening” holes provided by the kayak manufacturer on seats or their supports, may be used with short loops of rope in which to carabiner accessible gear such as throw ropes, water bottles, water filters, and repair/first aid kits. In my experience four such points of attachment is about right. If necessary, small holes to permit attachment loops may be drilled into inconsequential areas of an ABS or PE seat. 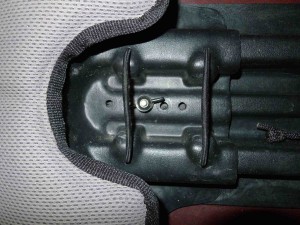 The seat is normally the most significant choke point when inserting fully packed stow floats. The ability to move your kayak’s seat up towards the bow will go a long way towards easing their installation. Seats that can be adjusted fore and aft on river without tools are preferable. If not, make sure to pack the appropriate tools to allow loosening of seats. Careful attention should be paid to seat positioning when considering a boat for self supporting. For seats which prove difficult to move forward in the field (…if you’re kayaking in a field, stop it. Find a river, NOW.), it may be necessary to leave the seat in the forward loading position and become accustomed to paddling more forward of center within the cockpit during day trips.

As long as we’re in the front of the boat, whatever will we do with all that space in front of our feet? I stopped using bow flotation years ago when the bags became swallowed up, rarely to be seen again, only rumored by rare sightings of their suggestively valved tails, somewhere north of the foot pedals. Nobody I boated with back then ever bothered with them. While I’m aware that decent front flotation designs are now available, it’s never seemed like enough flotation to get very excited about.  Frankly, better to work on your roll. Rather, small watertight containers or bags, including such uses as extra food or a potty kit may be inserted in the bow. Modern, field adjustable, foot bulkheads make the process of insertion and retrieval of gear at camp, so much easier. An easily adjustable and removable bulkhead is now paramount to me in any boat buying decision. I suppose, emptied and tightly closed, these containers might as well function as some kind of bow floatation anyway.

At least one manufacturer of whitewater kayaks includes three inches of foam on the actual bulkhead/footrest in which to cushion front impacts. While that much medium density foam may have great importance for the waterfall leaper and steep creeker, it appears to offer no significant safety advantage for normal river running. Pairing down the bulkhead/footrest cushioning an inch or more, if available, will bring your bulkhead up just that much, increasing the space to bow in front of the bulkhead. This is particularly significant for long-legged fellows like myself. Here is one place where the evolution of river runners towards 10 feet in length can pay dividends, allowing adequate space to pack significant gear fore of the bulkhead. Consider also that any weight added to the front may assist in overall balancing of the boat.

This site uses Akismet to reduce spam. Learn how your comment data is processed.